SoftAmp GT is a virtual emulation of a well-known analog guitar amplifier simulator stomp-box.
The prototype is a solid state circuit that uses op-amps to saturate the signal and moderate filtering to shape the tone throughout the signal path. The speaker simulation is achieved by a steep low-pass filter as well as some middle-frequency manipulation to resemble different microphone positions. All controls of the original device are faithfully reproduced in this plug-in in addition to some unique ones described below.
AMP – general amplifier family:

MOD – gain structure of the amplifier:


The original stomp-box was somewhat criticized for having a symmetrical hard-clipping saturation and there were a lot of attempts to modify the circuit to provide smoother tube-like sound by the community. Variations included using different op-amps and using a bipolar transistor to introduce the asymmetrical clipping. This plug-in takes this concept further by introducing a special control:
CLIP – clipping mode:

The most interesting is the Triode setting. It effectively replaces every op-amp in the circuit with a triode stage accurately modeled using the same engine used in the SoftAmp 3OD plug-in. It will perform asymmetric soft-cliping with dynamic behaviour that depends on the tube overdrive level that will produce a moderate amount of even harmonics. The overall difference is subtle, but it’s there. A good test would be listening to the effect applied to the sinusoidal input.
Another option is a very efficient 16x oversampling that has a non-obvious side-effect in addition to its main purpose (getting rid of the aliasing caused by the highly nonlinear distortion). Since the filters in this plug-in are digitized using the bilinear transform they exhibit a degrading matching with the analog prototypes with the frequencies approaching the Nyquist limit. Oversampling effectively shifts this frequency out of the sonic range thus greatly improving the filters’ performance at the sampling rates below or equal to 48000Hz.
SoftAmp GT also allows you to disable the embedded speaker simulation, so you can use your favourite speaker simulator plug-in with good impulses.
The last feature is the mono/stereo switch. It allows you to cut the CPU consumption in half when you don’t need both channels.
The GUI includes transfer function scopes for the three main clipping stages (there are more, but they are mostly operating in the linear range). There’s also a bode plot for pre- and post-filters, including the speaker simulation frequency response.
There are a number of presets that provide you a good starting point to experiment with this plug-in. 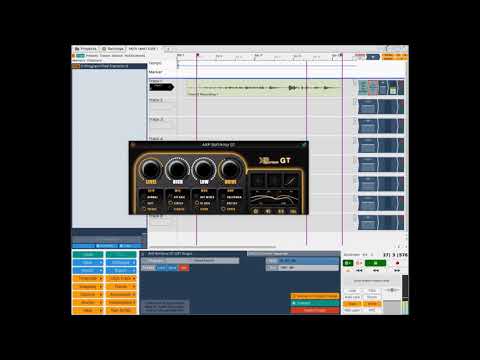