Sprike is an additive / wavetable synth.
This is an extended variant of Tunefish4, the virtual analog synth originally created by Brain Control.
We made Sprike cooperate more nicely in a MIDI-controlled environment (MIDI sequencers). Following MIDI standards, it responds to bank and program selection messages, master volume and pan controllers. Presets are stored in compliance with operating system conventions. We also added four new MOD sources and enhanced it with an on-screen keyboard. The user interface was enhanced with master volume/pan controls and a level meter. Delay times can be set in terms of note lengths.
Sprike is very lightweight, so you can add 10 or more instances to your project without much impact on CPU load. It has the same expressive and crisp sound as Tunefish and comes with a new bank of factory presets. 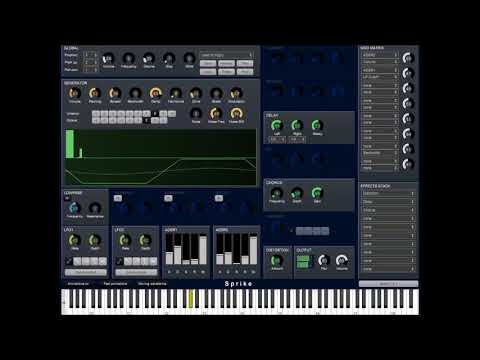