Cortex is a virtual guitar amp. Unlike most other amp simulations Cortex doesn’t try to emulate popular guitar amps, but creats it’s own unique sound instead.

It doesn’t contain any stomp box emulations. So you can use all stomp box emulations or even real stomp boxes in combination with Cortex. It doesn’t contain any post effects, eigther. Normaly you’ve other reverbs, eqs and the like, that are realy good, which probaply run on a DSP-card and consume less CPU than any effects that could be part of Cortex. This way you gain much more flexibility.

Cortex comes with a small expander. Because a guitar amplifier boosts the level a lot, noise can get realy loud even with high quality equipment. Using an expander you can avoid unwanted sounds. The expander is a seperate pluing. So you can place it before other effects (e.g. virtual stompboxes). You can even use it without Cortex for other tasks. An expander is similar to a gate but with a soft transition from open to close. (The difference is the same as between a limiter and a soft-knee compressor).

As a bonus you get three further plugins. Crazyator is a flanger that can get a bit crazy. Notcher is a phaser-like effect. Vowler is something like a Wah-Wah, but instead of a single resonanting Bandpass-Filter a Formant-Filter is used to create Vowel-like sounds.

Cortex itself consists of two plugins the aplifier and the cabinet simulation. 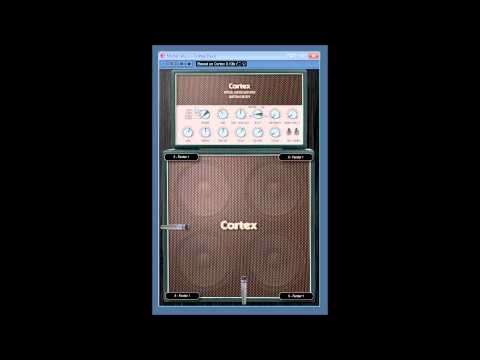